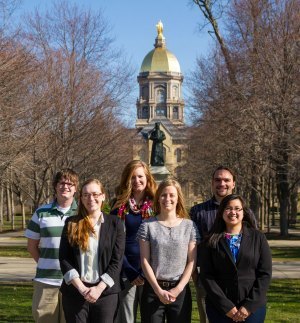 The Spring 2015 ACS GSSPC Symposium will be hosted by graduate students from the University of Notre Dame. The committe members include: 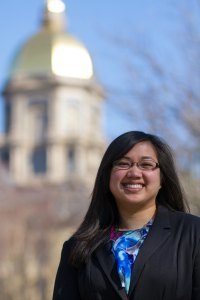 Karen Antonio completed three years of analytical research in her undergraduate career, monitoring cyanide levels in discharged water and comparing various Environmental Protection Agency methods from different wastewater facilities in the Santa Ana watershed. In 2010, she was awarded the ACS Undergraduate Award for Analytical Chemistry. Karen received a Bachelor’s of Science with Honors, majoring in Chemistry and minoring in Mathematics at California State University, San Bernardino in 2011.

As a fourth year graduate student at the University of Notre Dame (UND), Karen is pursuing analytical research under Dr. Zachary Schultz. During her first year, she was awarded the National Science Foundation Graduate Research Fellowship on her proposal to utilize nonlinear Raman imaging techniques to monitor chemical interactions in cellular systems. Alongside of research, Karen is part of the Chem Demo Team, performing demonstrations and supervising workshops for students ranging from kindergarten to 12th grade. She is also the 2014-15 President of the Association for Women in Science, Notre Dame Chapter. In 2014, Karen was awarded the Sister Jean Lenz, O.S.F. Leadership Award by the Graduate School for her role in facilitating a number of professional development and outreach activities, including monthly luncheons for female graduate students, staff, and faculty in STEM to share on-campus research and resources, and promote internal networking and collaborations. 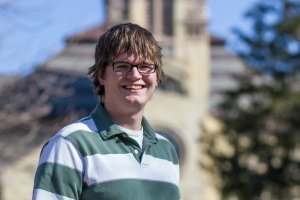 Cory Ayres is a fourth year graduate student at the University of Notre Dame. He was born in Atlanta, Georgia and attended Georgia Southern University where he received a Bachelor's of Science in Chemistry with a concentration in Biochemistry in 2011. Following his matriculation a the University of Notre Dame, Cory joined the labs of Dr. Brian Baker and Dr. Steve Corcelli. Cory's research focuses on in silico analysis of T-Cell receptors and major histocompatability complexes, both in their ligated and unligated state. Utilizing molecular dynamics simulations, he aims to gain insight to the roles that flexibility and dynamics play in T-Cell receptor specificity and cross reactivity. Currently, he is generating a library of all current crystalized major histocompatibility complexes through use of GPU accelerated molecular dynamics, with the intention to investigate the modulation of their dynamics as a result of their presented ligand. Outside of his research, Gory enjoys competitive bicycling and is currently training for a half ironman. 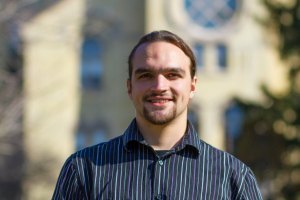 Kasey Clear is a 4th year graduate student at the University of Notre Dame studying bioorganic chemistry. He was born and raised in Niles, Michigan and studied at Southwestern Michigan College in Dowagiac, MI during high school, and transferred to Indiana University South Bend to complete his B.S. in Chemistry in May 2011. At IU South Bend, he worked as a study session leader and tutor for chemistry and biology courses and eventually as science team coordinator for the academic learning center. He also performed biochemistry research with Dr. Gretchen Anderson.

As a graduate student at Notre Dame, Kasey works under the guidance of Dr. Bradley Smith in the Chemistry and Biochemistry department. His current research focuses on molecular recognition using small organic ligands with a special interest in membrane recognition of anionic phospholipids for improved noninvasive molecular imaging probes and targeting strategies for cell death. Kasey also maintains both his research group website and a website for organic structure elucidation practice. In addition, he regularly participates in outreach events with the ND Chem Demo Team and has mentored and published with high school and undergraduate researchers. When not busy pushing back the frontiers of science and training the next generation of scientists, Kasey enjoys singing in ensembles with his family and other groups, playing rhythm and bass guitar, and knitting. 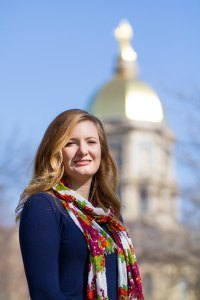 Ashley Gans was born and raised in the southern suburbs of Chicago. In the summer of 2006, she earned a research fellowship at the University of Chicago.  Ashley later attended Dominican University as an undergraduate. While there, she played two years of varsity volleyball before being awarded two consecutive stipends for undergraduate research.  She participated in the Hooked on Photonics REU at the Georgia Institute of Technology in the summer of 2010 and studied abroad in Ireland at the University of Limerick the following semester. She graduated in 2011 with a BS in Chemistry with Honors and minors in math and physics.

After working in industry for a year, Ashley began pursuing her PhD at the University of Notre Dame under the guidance of Dr. S. Alex Kandel. Her current research project uses scanning-tunneling microscopy to study how packing defects in self-assembly monolayers and the gold surface effect reactions with atomic gases. While at ND, Ashley realized her passion for teaching. Her work as a TA has earned her several formal recognitions as well as the 2013-2014 Emil T. Hoffman Graduate Teaching Award for teaching undergraduates in their first year of study. 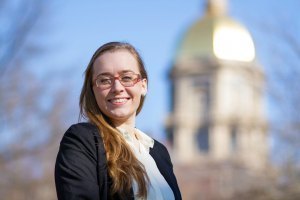 Michelle Pillers was born in Portland, OR, but was raised all over the world, ranging from Stilwell, KS to London, England. She attended Southern Methodist University (SMU) in Dallas, TX for her undergraduate education where she was a President's Scholar and earned a Bachelor of Science in Chemistry, Bachelor of Arts in Biology, and a minor in Physics. As an undergraduate, she worked in the lab of Dr. Patty Wisian-Neilson synthesizing cyclic phosphazenes. She also participated in two summer internships through the National Nanotechnology Infrastructure Network (NNIN) Program, the first at Stanford University and the second at the Department of Bioelectronics at the Center of Microelectronics in Provence based in Gardanne, France.

Michelle is currently a third-year graduate student in the Inorganic Division of the University of Notre Dame's Department of Chemistry and Biochemistry. As a member of Dr. Marya Lieberman's group, she explores the physical characteristics of DNA origami and is developing means to apply these DNA nanostructures to nanoelectronic patterning applications. Acquiring a passion for teaching during her early graduate career, she received departmental commendation for her TA performances in Spring 2013 and 2014. She was awarded the department's Graduate Assistance in Areas of National Need (GAANN) Teaching Fellowship and will be designing and teaching a course during the Spring 2015 semester. Michelle hopes to continue teaching and to pursue a career in academia. 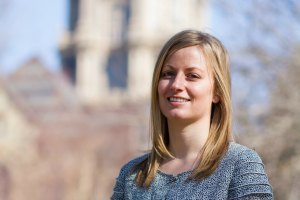 Laura Woods is a fourth year graduate student at the University of Notre Dame. She completed a Bachelor of Science with Honors, majoring in Chemistry in 2010 from The University of Otago, Dunedin, New Zealand. Her undergraduate research was carried out under the advisor Associate Professor Dave Larsen, working towards drug design and synthesis of small molecules. Laura was awarded a Fulbright Ministry of Science and Innovation Fellowship to travel to America to complete her PhD in Chemistry. Before starting her graduate career, she was a Research Assistant to Prof. Lyall Hanton (HOD) at The University of Otago. Her research was focused on silver coordination polymers of dipyridyl ketone oximes and resulted in a publication. At the University of Notre Dame she joined Prof. Richard Taylor’s synthetic lab and began working on two projects involved with polyketide natural products: Synthesis, Conformational Analysis, Biological Evaluation, and Chimeric Analogues of the ATPase inhibitor (-)-Apicularen, and Development of Novel Epothilone based Microtubule Stabilizing Therapeutics. During the summer of 2014 she is working at Stockholm University, Sweden for Prof. Jan-Erling Bäckvall on Biocatalysis of DKCMOs and modified flavins. Aside from research, Laura enjoys traveling, having explored‬ 18 states so far during her time in America.